This is the new Reality Drop. No games, just truths.
MYTH #44: The troposphere isn’t warming

If you look at the upper regions of the atmosphere, you'll find it isn't warming.

Data from several independent satellites show the troposphere (the part of the atmosphere in which we live) is warming. This trend is one of many lines of evidence that the Earth is warming because humans are putting carbon pollution into the atmosphere. The argument should really end here, but let’s talk for a second about why, back in the 90s, it appeared as though the tropospheric warming trend wasn’t very pronounced. It turns out the methodologies scientists used decades ago to compile and interpret the data weren’t perfect. As techniques improved, it became clear that the troposphere was warming — a fact that is consistent with basic physics.

From 1978, a series of satellites have measured atmospheric temperature in the troposphere and stratosphere. The data are spliced together and adjusted for time-dependent biases by the University of Alabama in Huntsville (UAH), headed by John Christy and Roy Spencer. The initial results showed a warming trend of only 0.09°C per decade, well below the surface temperature trend of 0.17°C per decade. Climate models predict the troposphere should show greater warming than the surface.

In November 2005, Carl Mears and Frank Wentz at Remote Sensing Systems (RSS) performed an independent analysis of the satellite data. In the process, they found an algebraic error in the UAH analysis. With the correction made, the UAH trend was now 0.12°C per decade — larger but still less than the surface trend. However, RSS released their own results based on their data analysis — a trend of 0.19°C per decade. 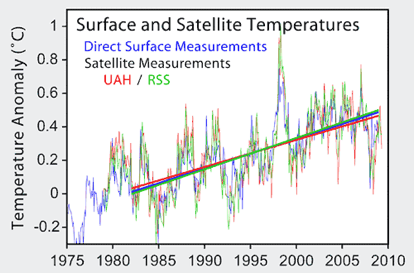 Figure 1: UAH satellite data (red) compared to RSS satellite data (green) and surface measurements (blue). Image created by Robert Rohde/Global Warming Art.
Correcting for diurnal drift Part of the discrepancy between UAH and RSS was a result of the methods used to splice the data from different satellites together. However, the major source of discrepancy was the way they corrected for diurnal drift. The satellites orbit the earth from pole to pole. The satellites possess no propulsion, so slowly over time, the local equator crossing time (LECT) changes. This is exacerbated by decay of the satellite’s orbital height, dragged down by the thin atmosphere. As a satellite's LECT changes, it takes readings at changing local times, allowing local diurnal cycle variations to appear as spurious trends. UAH and RSS employed different methods to adjust for diurnal drift and the results are radically different. 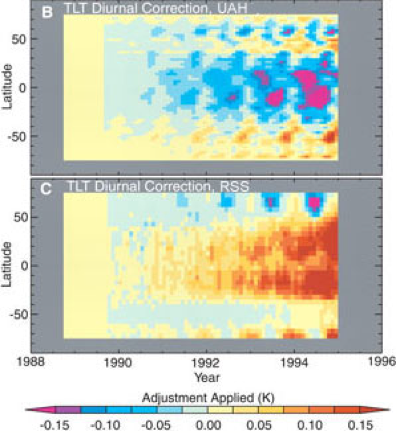 Figure 2: Diurnal drift corrections by UAH and RSS. UAH corrections add an overall cooling effect. RSS corrections added an overall warming effect. Both teams show strongest corrections in the tropics but in opposite directions. From Carl A. Mears and Frank J. Wentz, “The effect of diurnal correction on satellite-derived lower tropospheric temperature,” Science 309, no. 5740 (September 2, 2005): 1548-1551, Figure 1, DOI: 10.1126/science.1114772. Reprinted with permission from AAAS.
So where does that leave us? An Executive Summary (PDF) by the U.S. Climate Change Science Program, co-authored by John Christy of UAH concludes:
"Previously reported discrepancies between the amount of warming near the surface and higher in the atmosphere have been used to challenge the reliability of climate models and the reality of human-induced global warming. This significant discrepancy no longer exists because errors in the satellite and radiosonde data have been identified and corrected. While these data are consistent with the results from climate models at the global scale, discrepancies in the tropics remain to be resolved.
"This difference between models and observations may arise from errors that are common to all models, from errors in the observational data sets, or from a combination of these factors. The second explanation is favored, but the issue is still open."
In other words, according to UAH, satellite measurements match the models apart from in the tropics. This error is most likely due to data errors. According to RSS, satellites are in good agreement with models.
Readers may view, browse, and/or download material for temporary copying purposes only, provided these uses are for noncommercial personal purposes. Except as provided by law, this material may not be further reproduced, distributed, transmitted, modified, adapted, performed, displayed, published, or sold in whole or in part, without prior written permission from the publisher.
Adapted from © John Cook and Skeptical Science