How can we be getting warmer when the hottest year on record in America was eight decades ago?

In the contiguous United States, the record wasn’t even close. 2012 was the warmest year on record, and 1 degree Fahrenheit warmer than the previous record in 1998. 1934 comes in fourth.

But here's what matters the most: One year only gives us a snapshot in time, not a long-term trend. There’s also no reason to expect the temperature trends in the U.S. — which only makes up 2% of the planet’s surface — to perfectly track the average temperature of the planet. Globally, 2010 was tied with 2005 for the hottest year on record, and 1934 didn’t even make the top 60. Nine of the ten hottest years on record have occurred since the year 2000.

By a wide margin, 2012 was the United States’ warmest year on record 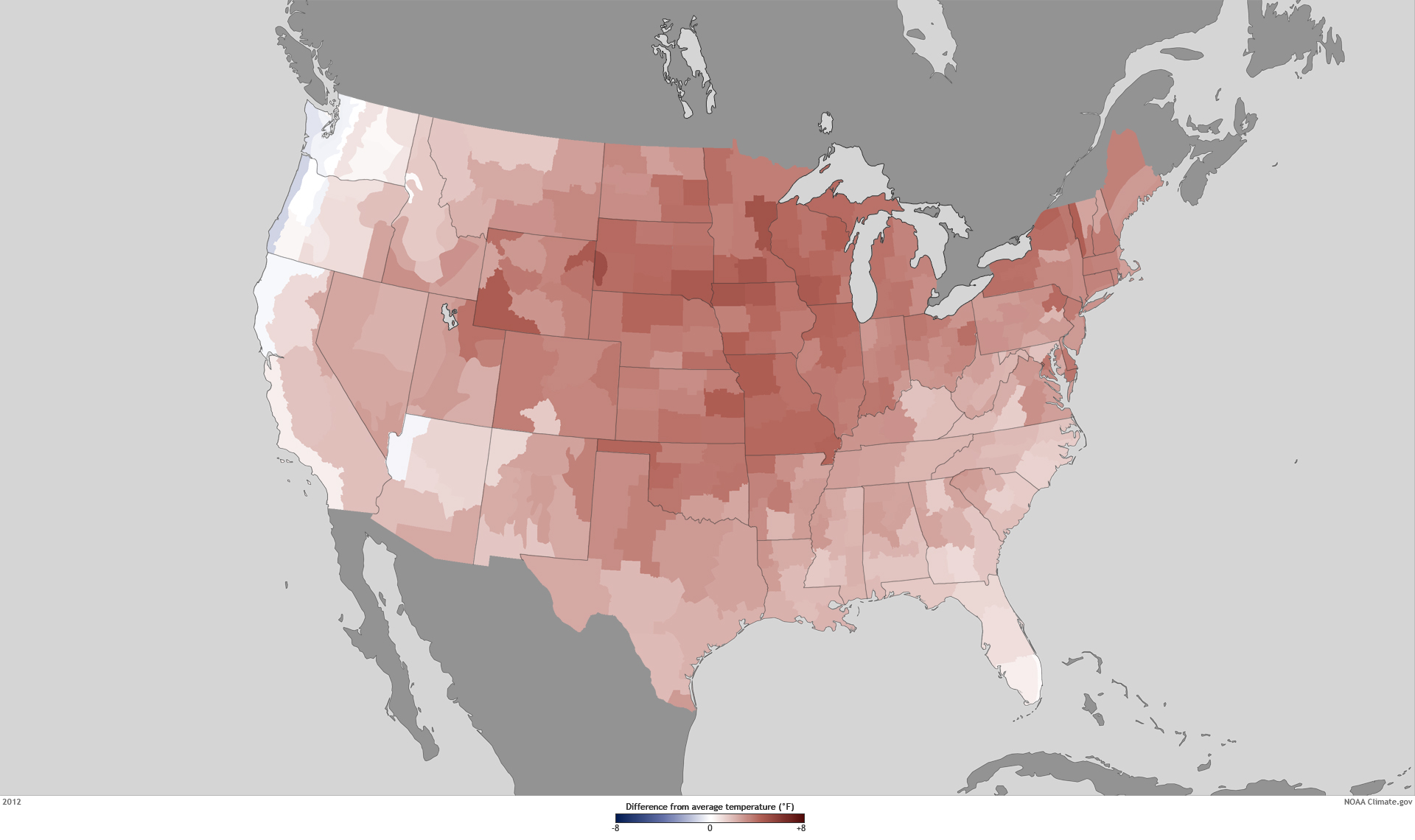 According to the latest statistics from NOAA’s National Climatic Data Center, the average temperature for the contiguous United States for 2012 was 55.3 degrees Fahrenheit, which was 3.2 degrees Fahrenheit above the twentieth-century average and 1.0 degrees Fahrenheit above the previous record from 1998. The year consisted of the fourth-warmest winter, a record-warm spring, the second-warmest summer, and a warmer-than-average autumn.
The map above shows where the 2012 temperatures were different from the 1981–2010 average. Shades of red indicate temperatures up to 8 degrees Fahrenheit warmer than average, and shades of blue indicate temperatures up to 8 degrees Fahrenheit cooler than average — the darker the color, the larger the difference from average temperature.
Every state in the contiguous United States had an above-average annual temperature for 2012. Nineteen states had a record-warm year, and an additional 26 states had one of their 10 warmest. On the national scale, 2012 started off much warmer than average, with the fourth-warmest winter (December 2011–February 2012) on record. The winter snow cover for the contiguous United States was the third smallest on record, and snowpack totals across the Central and Southern Rockies were less than half of normal.
Spring started off exceptionally warm, with the warmest March on record, followed by the fourth-warmest April and second-warmest May. The season’s temperature was 5.2 degrees Fahrenheit above average, easily the warmest spring on record, surpassing the previous record by 2.0 degrees Fahrenheit. The warm spring resulted in an early start to the 2012 growing season in many places, which increased water demand on the soil earlier than what is typical. In combination with the lack of winter snow and lingering dryness from 2011, the record-warm spring laid the foundation for the great drought of 2012.
Maps by NOAA climate.gov team, based on Climate Division Data from the National Climatic Data Center. Caption by Susan Osborne and Jake Crouch, adapted from the December 2012 National Climate Analysis from the National Climatic Data Center. Reviewed by Jake Crouch.