This is the new Reality Drop. No games, just truths.
MYTH #75: Animals and plants can adapt

Plants and animals have adapted to adverse conditions in the past. They will adjust to climate change.

For many species, including humans, the climate may be changing faster than we can keep up.

Climate change poses serious dangers for plant and animal life on Earth. Adaptation to changes in the environment can take a long time. That’s one big reason the rate of manmade climate change is so worrisome. For many species, our climate may be changing faster than they can keep up. And keep in mind that climate change isn’t the only way humans are altering the natural environment. Deforestation, urban sprawl and the use of toxic chemicals are environmental stress points making it ever more difficult for plants and animals to adapt. In short: At the rate we’re going, thousands of species could be in real danger.

Additional info from the U.S. Fish and Wildlife Service 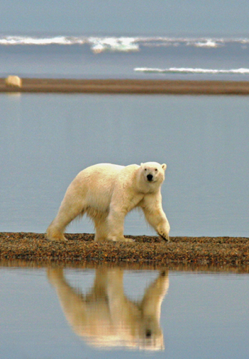 Source: USFWS
A growing body of evidence has linked accelerating climate change with observed changes in fish and wildlife, their populations, and their habitats in the United States. Polar bear population declines have already been noted in Canada, and extirpations of Bay Checkerspot Butterfly populations in the San Francisco Bay area are also documented. Across the continental United States, climate change is affecting the migration cycles and body condition of migratory songbirds, causing decoupling of the arrival dates of birds on their breeding grounds and the availability of the food they need for successful reproduction.
Climate change has very likely increased the size and number of wildfires, insect outbreaks, pathogens, disease outbreaks and tree mortality in the interior West, the Southwest and Alaska. In the aquatic environment, evidence is growing that higher water temperatures resulting from climate change are negatively impacting cold- and cool-water fish populations across the country. Along our coasts, rising sea levels have begun to affect fish and wildlife habitats, including those used by shorebirds and sea turtles that nest on our coastal National Wildlife Refuges. In the oceans, subtropical and tropical corals in shallow waters have already suffered major bleaching events driven by increases in sea surface temperatures.
Climate change has the potential to cause abrupt ecosystem changes and increased species extinctions.