This is the new Reality Drop. No games, just truths.
MYTH #51: Climate sensitivity is low

The climate isn't that sensitive to human activities, and at most we're looking at a small increase in global temperatures.

Even a global temperature rise of 2 degrees Celsius will disrupt our lives and challenge our ability to cope.

One thing is certain about the Earth’s climate: It’s warming — and warming fast — because of carbon pollution from human activities. What’s less certain is how much the planet will warm by the end of the century. For one thing, it’s hard to say just how much carbon pollution humans will pump into the atmosphere 50 or 100 years from now. The other thing that’s a little unclear is “climate sensitivity," or how much the Earth will warm in response to carbon pollution in our atmosphere. The best estimates suggest doubling the amount of carbon dioxide in the atmosphere would increase the world’s temperature by 3.6-8.1 degrees Fahrenheit (that's 2-4.5 degrees Celsius). Even a 2-degree Celsius rise is expected to disrupt our lives and challenge our ability to adapt. We had better hope that the climate sensitivity is low — but we shouldn’t bank on it.

There are some things about our climate we are pretty certain about. Unfortunately, climate sensitivity isn’t one of them. Climate sensitivity is the estimate of how much the Earth's climate will warm if carbon dioxide equivalents are doubled. This is very important because if it is low, as some skeptics argue, then the planet isn’t going to warm up very much. If sensitivity is high, then we could be in for a very bad time indeed.
There are two ways of working out what climate sensitivity is (a third way — waiting a century — isn’t an option, but we’ll come to that in a moment). The first method is by modeling (Figure 1). 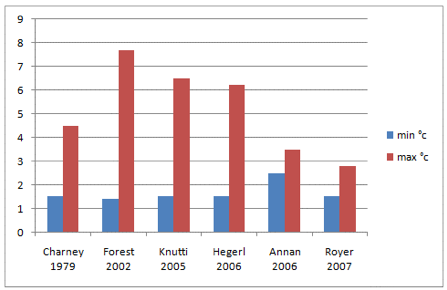 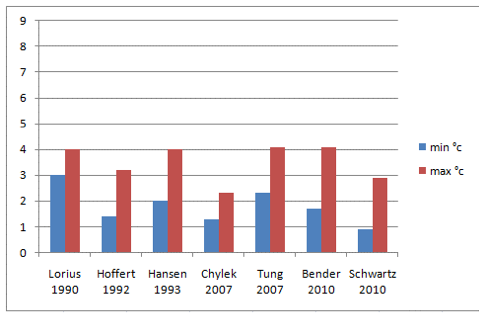 Figure 2: Range of potential temperature increases calculated from empirical evidence. © John Cook.
These calculations use data from sources like ice cores, paleoclimate records, ocean heat uptake and solar cycles to work out how much additional heat the doubling of greenhouse gases will produce. The lowest estimate of warming is close to the models — 1.8°C (3.24°F) on average — but the upper estimate is a little more consistent, at an average of around 3.5°C (6.3°F).

It’s all a matter of degree

To the layperson, the arguments are obscure and complicated by other factors, like the time the climate takes to respond. But climate sensitivity is not just an abstract exchange of statistics relevant only to scientists. It also tells us about the likely changes to the climate that today's children will inherit.
Consider a rise in sea levels, for example. Predictions range from centimeters to many meters, and the actual increase will be governed by climate sensitivity. The 2007 IPCC report proposed a range of sea level rise based on different increases in temperature. But we now know they underestimated sea level rise, perhaps by a factor of three, in part because of a lack of data about the behavior of the Greenland and Antarctic ice sheets.
Current estimates of sea level rise alone, as a result of a two-degree rise in temperature, are very worrying. More worrying is that the current projections do not account for recently accelerated melting of polar regions. There are also many other possible effects of a 2°C rise (3.6°F) that would be very disruptive.
All the models and evidence confirm a minimum warming close to 2°C for a doubling of atmospheric CO2, with a most likely value of 3°C and the potential to warm 4.5°C or even more. Even such a small rise would signal many damaging and highly disruptive changes to the environment. In this light, the arguments against mitigation because of climate sensitivity are a form of gambling. A minority claim the climate is less sensitive than we think, the implication being we don’t need to do anything much about it. Others suggest that because we can't tell for sure, we should wait and see.
In truth, nobody knows for sure quite how much the temperature will rise, but rise it will. Inaction or complacency heightens risk. We are gambling with the entire ecology of the planet and the welfare of everyone on it.
Adapted from © John Cook and Skeptical Science