This is the new Reality Drop. No games, just truths.
MYTH #9: There’s more carbon dioxide due to natural causes

CO2 in the air comes from volcanoes, the oceans and other natural sources, not humans.

How can scientists be sure that humans are increasing heat-trapping carbon dioxide? First, the carbon dioxide in the atmosphere has increased about 40 percent since humans started burning dirty energy like coal and oil on a wide scale. Second, the carbon from dirty energy has a unique chemical signature that allows scientists to tell it apart from other sources of carbon. Third, the amount of oxygen in the atmosphere is decreasing. It takes oxygen to burn trees or coal, and the more burning we do, the more oxygen we suck up. The evidence is inescapable: Humans ARE changing our climate.

Additional info from the Union of Concerned Scientists

Carbon dioxide (CO2) is the main heat-trapping gas largely responsible for most of the average warming over the past several decades. There are ways that scientists can tease apart the atmospheric concentration of CO2 to see how much of the CO2 is from natural sources and how much is from combusted fossil fuel sources.

The atmospheric concentration of CO2 has increased from a pre-industrial era (AD 1000-1750) concentration of approximately 280 parts per million (ppm) to around 392 ppm in 2011. Carbon dioxide from burning fossil fuels is chemically different than carbon dioxide that occurs naturally, so scientists can tell that fossil fuel emissions comprise the largest source of the increase since the pre-industrial era. 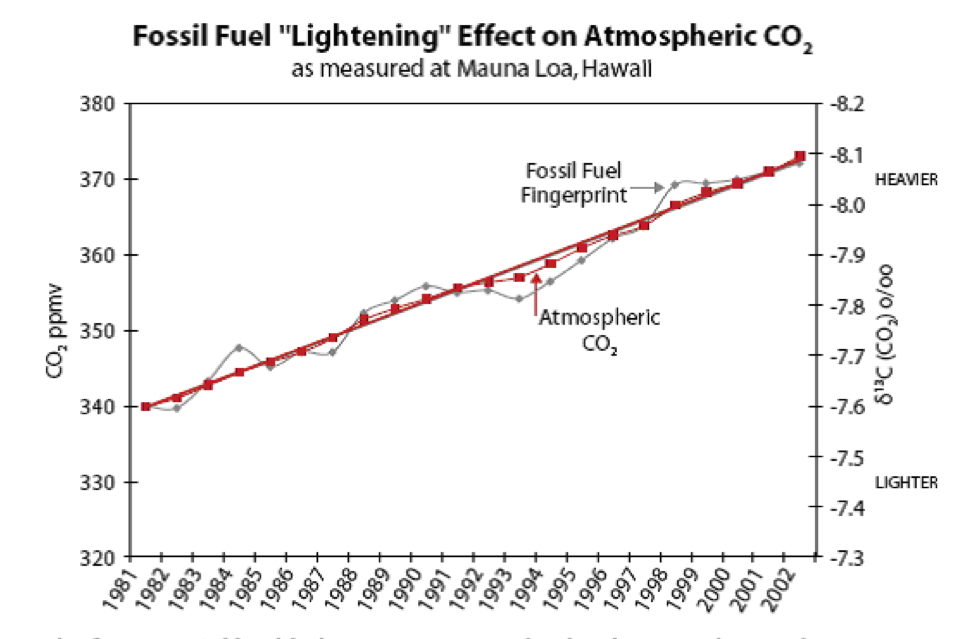 Figure 1: The “fingerprint” of fossil fuel emissions contained within atmospheric carbon dioxide. The isotope signature of fossil fuels (grey line) corresponds to the increase in atmospheric concentration of CO2 (red line). The isotope data are expressed as δ13C (CO2) ‰ (per mil) deviation from a calibration standard. Note that this scale is inverted to improve clarity with the correlation. © Union of Concerned Scientists.


Adapted from © Union of Concerned Scientists