Where's your global warming now? Antarctica has been gaining ice for years.

Antarctica is doing better than the Arctic, but if global warming continues, none of the world's ice is safe.

Arctic sea ice is rapidly declining as the world warms. Since 1979, the extent of summer sea ice in the Arctic has declined by almost 1.2 million square miles. But Antarctic sea ice hasn't followed suit so far. In fact, there has been a slight gain in winter sea ice since 1979: about 0.2 million square miles. Why? Scientists aren't sure, but the ozone hole might be partly to blame. What we do know is that our planet is steadily warming due to pollution from dirty energy like oil and coal. At the current rate of warming, the Arctic could be nearly ice-free in the summer by 2035. And even in Antarctica, sea ice won't be around forever if the Earth keeps warming.

Additional info from the National Snow and Ice Data Center

The Arctic Ocean is not the only place with sea ice. The ocean surrounding the continent of Antarctica also freezes over each winter. But we don’t hear much about sea ice on the bottom of the planet. What’s happening to Antarctic sea ice and why does it matter?
One reason that we hear less about Antarctic sea ice than Arctic sea ice is that it varies more from year to year and season to season than its northern counterpart. And while Arctic ice has declined precipitously over the past 30 years of the satellite record, average Antarctic sea ice extent has stayed the same or even grown slightly.
Yet researchers say that Antarctic sea ice plays an important role in climate, helping to protect the Antarctic Ice Sheet from waves, warmer surface water, and warmer air that can destabilize Antarctica’s ice shelves and help speed the flow of continental ice into the ocean. And in some regions, Antarctic sea ice is not as stable as it used to be.

“The two polar regions are essentially geographic opposites,” says Sharon Stammerjohn, a sea ice expert at the University of Colorado Institute for Arctic and Alpine Research (INSTAAR). “Sea ice in the Arctic Ocean is landlocked, while sea ice in the Southern Ocean is surrounded by open ocean.” That means that while Arctic sea ice is confined in a given space, Antarctic sea ice can spread out across the ocean, pushed by winds and waves. That also means that ice extent varies much more in the Southern Hemisphere than it does in the North.
Overall, Antarctic sea ice has grown slightly over the past 30 years of the satellite record, but the trends are very small, and the ice extent varies a lot from year to year. In Southern Hemisphere winter months, ice extent has increased by around 1 percent per decade. In the summer, ice has increased by 2 to 3 percent per decade, but the variation is larger than the trend.
Although Antarctic sea ice is increasing overall, certain regions around Antarctica are losing ice at a rapid pace (Figure 1). In the Amundsen and Bellingshausen seas, west of the Antarctic Peninsula, the sea ice cover has declined dramatically in the last 30 years, with the winter sea ice cover lasting three months less in 2010 than it did in 1979. The main areas where ice extent is growing are the Ross Sea (north of the largest U.S. base, McMurdo) and the eastern Weddell Sea (south of Africa), although there is a lot of variability. 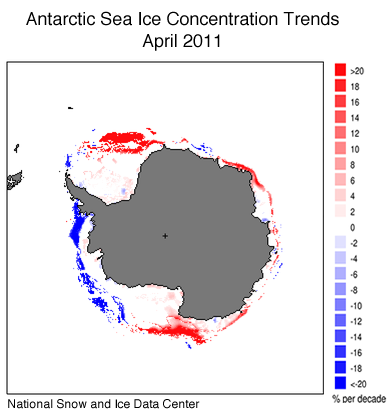 Some research suggests that the changes in Antarctic sea ice — both where it is increasing and where it is decreasing — are caused in part by a strengthening of the westerly winds that flow unhindered in a circle above the Southern Ocean. “Antarctic sea ice is governed more by wind than by temperature,” said NSIDC lead scientist Ted Scambos. “The effects of climate change play out differently in the southern hemisphere than the northern hemisphere.”
Scientists say that this westerly wind pattern has grown stronger in recent years as a result of climate change. However, because Antarctic sea ice is so vulnerable to the changes in both the atmosphere and ocean, researchers are also looking at other climate patterns, such as the high latitude response to the El Niño-Southern Oscillation, as well as the effects of changing ocean temperature and circulation, to understand how Antarctic sea ice is changing.
Stammerjohn and other scientists say that declining sea ice around the Antarctic Peninsula probably helps destabilize continental ice in that area by allowing the air above the ocean in that region to warm more than before. These continental ice areas are shrinking and therefore contributing to sea level rise. Stammerjohn said, “Though it is true that, on average, Antarctic sea ice is not changing, or even slightly increasing, the overall average hides a very large regional decrease that could have global consequences.”
Source: National Snow and Ice Data Center