This is the new Reality Drop. No games, just truths.
MYTH #37: The Medieval Warm Period was warmer

If you think it’s warm now, look back at the Medieval Warm Period.

The so-called Medieval Warm Period was actually cooler than it is today under man-made climate change.

When climate deniers want to change the subject away from the warm temperatures we're experiencing now, they sometimes claim it was warmer in Medieval times. First off, during the so-called "Medieval Warm Period," some regions experienced unusually warm temperatures, while others were really cold. If you average everything out, global temperatures during this period were actually COOLER than they are now. Moreover, in Medieval times, warming or cooling happened for natural reasons, and there was no significant carbon pollution to warm our atmosphere. Overwhelming evidence points to carbon pollution from dirty energy like coal and gas as the main cause of today’s climate change.

The Medieval Warm Period spanned 950 to 1250 A.D. and corresponded with warmer temperatures in certain regions. During this time, ice-free seas allowed the Vikings to colonize Greenland. North America experienced prolonged droughts. Just how hot was the Medieval Warm Period? Was the globe warmer than now? To answer this question, one needs to look beyond warming in a few regions and view temperatures on a global scale.
Prior temperature reconstructions tend to focus on the global average (or sometimes hemispheric average). To answer the question of the Medieval Warm Period, more than 1000 tree-ring, ice core, coral, sediment and other assorted proxy records spanning both hemispheres were used to construct a global map of temperature change over the past 1500 years (Figure 1). The Medieval Warm Period saw warm conditions over a large part of the North Atlantic, Southern Greenland, the Eurasian Arctic, and parts of North America. In these regions, temperature appears to be warmer than the 1961–1990 baseline. In some areas, temperatures were even as warm as today. However, certain regions such as central Eurasia, northwestern North America, and the tropical Pacific are substantially cooler compared to the 1961 to 1990 average. 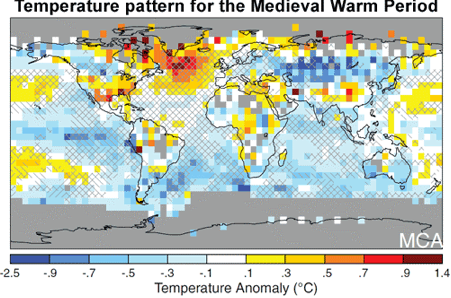 Figure 1: Reconstructed surface temperature anomaly for the Medieval Warm Period (950 to 1250 A.D.), relative to the 1961–1990 reference period. Gray areas indicate regions where adequate temperature data are unavailable. From Michael E. Mann et al., “Global signatures and dynamical origins of the Little Ice Age and Medieval Climate Anomaly,” Science 326, no. 5957 (November 27, 2009): 1256-1260, Figure 2a. Reprinted with permission from AAAS.
How does the Medieval Warm Period compare to current conditions? Figure 2 is the temperature pattern for the last decade (1999 to 2008). What we see is widespread warming (with a few exceptions such as regional East Antarctic cooling). 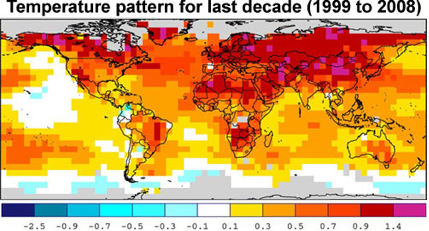 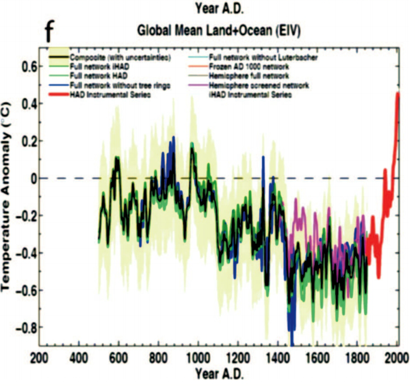 Figure 3: Global surface temperature reconstruction from Michael E. Mann et al., PNAS 105, no. 36 (September 9, 2008): 13252-13257, Figure 56(f), DOI 10.1073 pnas.0805721105, © 2008 PNAS
Readers may view, browse, and/or download material for temporary copying purposes only, provided these uses are for noncommercial personal purposes. Except as provided by law, this material may not be further reproduced, distributed, transmitted, modified, adapted, performed, displayed, published, or sold in whole or in part, without prior written permission from the publisher.
Adapted from © John Cook and Skeptical Science